With a name that clearly states its purpose, Awesome Screenshot: Capture & Annotate is one of the most useful and most popular cross-browser extension. 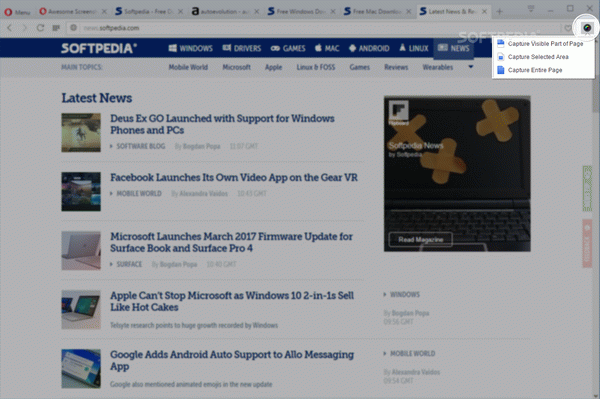 It comes in handy to anyone who's looking for a quick and hassle-free way of capturing, annotating, and sharing screenshots within Opera, Google Chrome, and Firefox. After its typical installation (just like most Opera extensions, it only requires you to click the "Add to Opera" button from the official store), the extension integrates with Opera's top toolbar.

Before we go even further, there's something we must acknowledge. Sadly, the Opera version of this extension is the most stripped-down of the lot. Not only this, but it's not exactly well-maintained, either, as we will point out a bit later on.

Click its small icon, and you are greeted by a very unobtrusive drop-down menu that displays three self-explanatory capturing modes, namely "Visible Part of Page," "Selected Area," and "Entire Page." Once the screenshot has been captured, the extension automatically opens a new tab where you are greeted by a straightforward Edit section.

You can crop the selection, add rectangles, ellipses, pointers, arrows, lines, as well as freely draw anything and blur content. Besides this, you can also add text and make use of a limited color picker.

Within the same section, you are also presented with the option to save the screenshot to Diigo.com or directly to your Google Drive, as well as copy it to your computer's clipboard or save it locally but, for some strange reason, despite our efforts, we weren't able to save any screenshot as PNG.

Speaking of strange reasons, we should point out that during our tests, the only fully-functional capture mode was the "Visible Part of Page." As it turns out, we're not the only ones who have encountered this problem, as a great number of other users have also complained about this in the Review section from its Opera Extension's page.

In addition to all this, not only does Awesome Screenshot: Capture & Annotate for Opera come with support just for PNG but it also doesn't feature a delayed capture mode, like in the case of its Firefox and Chrome counterparts.

To end with, we must say that it's quite a shame that the Opera version of this extension does not live up to its full potential. If entirely functional, we would have no problems recommending this extension, but that clearly is not the case here.

thanks for Awesome Screenshot: Capture & Annotate for Opera keygen