When going on trips, most people take a lot of photos of all the beautiful places they visit, but after they come back home, some might forget which pic was taken where, and this leads to confusing memories and stories. Carambis PhotoTrip is an app that aims to end this confusion by helping users effortlessly associate images with their GPS tracks. 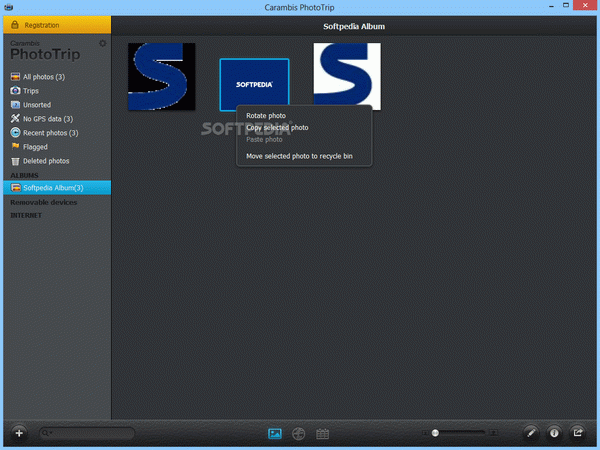 Once they installed it on their computer, users can start importing their images within Carambis

PhotoTrip and create new albums. One needs to rely on the dedicated button for selecting images, as drag and drop is not supported.

Carambis PhotoTrip allows users to flag their pictures and to apply then several filters, so as to enhance their look - they can also adjust the rotation angle, as well as modify the brightness, saturation and contrast.

Due to Carambis PhotoTrip, users can change the pic’s name, assign it a description and relevant keywords, while also manually browsing the integrated map and associating the image with a certain location.

In order to create a trip, users also need to import their GPS track containing geodata, then select the images they want to include. At this point, it is up to them to remember the location where they took each image (or analyze the EXIF data of their photos) and simply drag it onto the map.

One of the perks of Carambis PhotoTrip is that it includes a special version of any map, where cyclist tracks are highlighted thus making it easier for any user to locate a certain point where they took the picture, if they were riding a bike.

All in all, Carambis PhotoTrip is a nifty application that can help all users create appealing image trips then share them with friends via Flickr, Facebook, Google+ and other services, but also as a webpage that can be accessed within any browser or an image.