If you own a computer that's connected to the Internet, you are probably aware that there are many risks just lurking around the corner, waiting to strike your PC when it's most vulnerable. 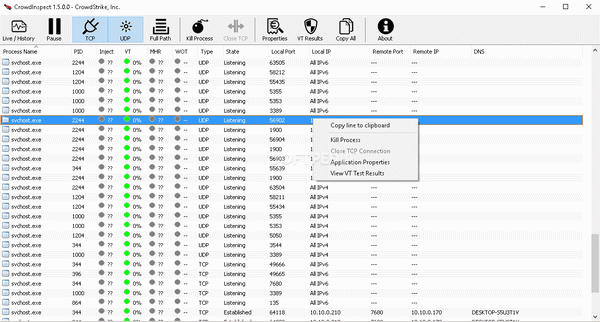 However, you can turn to specialized software to prevent and counter these attacks in a quick, efficient manner. CrowdInspect is one of these apps.

This application lets you view a list of processes on your computer, in order to verify if any of them has malicious behavior and communicates over the network.

When you launch the application, you will be prompted with a window where you can view a brief description of the program's functions and choose between using a built-in VirusTotal API key or a personal one, which can be manually typed.

After you close the window mentioned above, you will be greeted by CrowdInspect's interface, which provides you with a list of processes on your computer along with additional information about each one of them.

You can choose to view TCP processes, UDP ones or both by pressing the corresponding buttons on the window. Alternatively, you can choose a live/history view that switches between live processes and ones that were scanned in the past.

Furthermore, it is possible to view the full path of the processes by clicking the "Full Path" button and kill any process with the "Kill Process" function. If you want to view a brief VT report, you can do so by clicking the "VT Results" button.

All things considered, if you want to keep track of what processes on your PC communicate with, you can do so by turning to CrowdInspect. It comes with a simple interface, does not require installation and integrates a VirusTotal API key.