Flowchart to Code is a piece of software designed to provide users with the possibility to easily convert flowcharts into code, for development purposes. 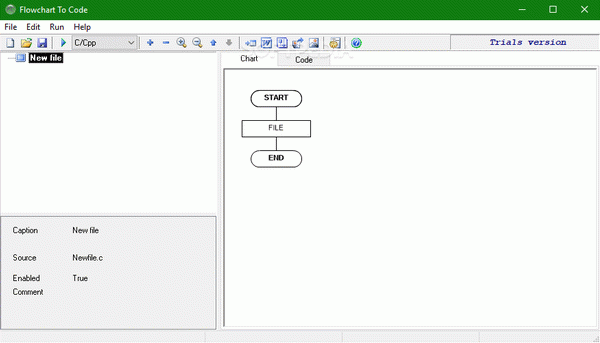 The application comes with an intuitive, easy-to-use interface, making it simple even for beginners to generate source code from flowcharts with only a few mouse clicks.

With the help of this utility, developers no longer need to type the source code manually, as they only need to create a chart that represents their project, and use the tool to automatically generate the source code, thus accelerating the development process.

Users can easily edit the source code, so as to add new elements to it, thus customizing their apps and bringing the code closer to its final form.

The software has been designed with support for generating the source code in multiple programming languages, such as C, C++, C#, Java, and Delphi, which makes it suitable for the building of apps for various operating systems.

The utility is capable of exporting flowcharts to a series of other programs, including Word and Visio, which makes it easy for devs to print these. Flowcharts can be exported to xml or can be saved in the form of Auto Code files.

With the help of this piece of software, developers can convert only parts of the flowcharts to code, which delivers increased flexibility when it comes to analyzing only pieces of larger projects.

The program comes with support for making specific changes to flowcharts, including changing their color, fonts, or size. Users are also offered the possibility to zoom in and out of the charts, for a better analysis of their creation.

During our testing, the application offered fast performance, though it did displayed a series of error messages when we tried to change a project's caption.

All in all, Flowchart to Code is an easy-to-use but powerful tool for application development, which eliminates the need to write code line by line, and which can generate the code from flowcharts. It is quite snappy, and also offers increased flexibility, courtesy of support for various programming languages.