Keeping track of all your computers and accessing files from them whenever they are needed requires help from file sharing tools. Although many users turn to cloud-based apps (such as Dropbox or Google Drive), others prefer the advantages of peer-to-peer utilities which establish direct connections to the remote machines, don't take up space by creating temporary files and protect privacy by not collecting and sending tracking data to the server. 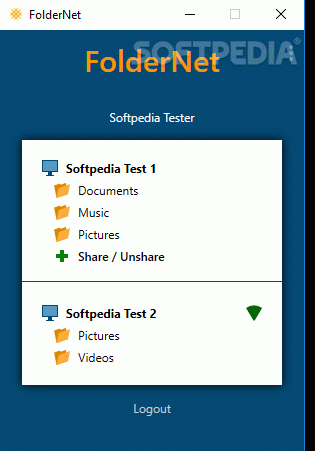 Currently in beta stage, FolderNet is a program that falls in the second category. Lightweight, free and incredibly easy to use, it's capable of creating virtual disks to share containing files and folders with other machines, connecting everything through a simple account.

Following a speedy, uncomplicated setup operation, FolderNet gets automatically added to the Windows startup sequence, which means that it runs on its own every time you turn on your computer. Creating an accessible icon in the systray, the application invites you to get started by signing up for a free account using a name, email address and password. Email confirmation isn't necessary but there's an option to recover lost passwords via email.

Once logged in, FolderNet creates a virtual disk right away called "FolderNet Virtual Disk", which can be viewed in Windows Explorer or any other file manager. To add content, you can either use the copy and paste functions of Windows Explorer or the options available in the main app window. Some preset directories can be quickly added, namely Documents, Music, Pictures and Videos. Keep in mind that any existing files will be auto-shared by FolderNet.

It's possible to connect to multiple computers not only in the local network but also anywhere in the world using an account, view all machines and shared folders in a hierarchical view, and effortlessly access a folder by clicking its entry in this list (opens its location in Windows Explorer). There's also an option for changing how your computer is shown to others but doesn't work for renaming remote PCs.

As far as security goes, the developer says that the connection between the machines is encrypted and authenticated with the account password, so data isn't sent to the cloud and made accessible to anyone else. Minimal system resources were used in our tests and FolderNet established remote PC connections swiftly. We're looking further to new features as well as a stable release.