From the makers of CPU-Z comes HWMonitor, a very small and simple-to-use system monitoring tool whose job is to keep track of the most important sensors on your computer and find out live readings for HDD temperature and fan speed. It features data exporting options. 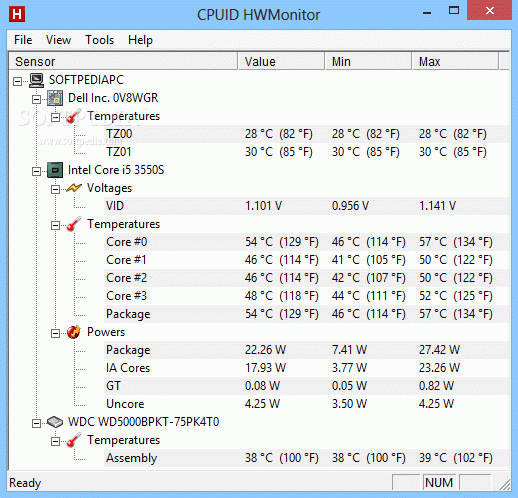 Setting up HWMonitor is a fast and easy task, since it does not require special configuration. It is packed in a normal window with a straightforward layout and automatically starts monitoring the sensors at startup, listing all components in a hierarchical view to spot them easier.

Information revolves around the processor, hard disk and graphics card. You can find out the current, minimum and maximum value when it comes to the RPM, fan capacity in percentage, temperature for each core (in Celsius and Fahrenheit), assembly and air flow temp, along with the graphics card voltage.

All this information can be exported to a plain text document in case you want to look it over at a later time and compare values with future reports to determine the hardware history and improvements toward temperature, in order to prevent overheating. The detailed report includes processor timers, thread dumps, storage information for each drive, USB devices, graphic APIs, and other data.

Alternatively, you can create an SMBus report. It is also possible to reset all minimum and maximum values, as well as to hide the status bar.

SMBus worked smoothly in our tests, without causing the OS to hang, crash or pop up error messages. It shows accurate information and leaves a small footprint on system resources. Too bad it lacks some important customization settings, such as the ability to change the data refresh rate. Nevertheless, HWMonitor offers a simple effective solution to find out live readings for your computer's sensor. Additional features are available in the paid version, HWMonitor Pro.