Desktop-based autocorrect and copyeditor widgets, as useful as they might be, might still seem a little inconvenient to try when your exercise implies a little of online stuff. 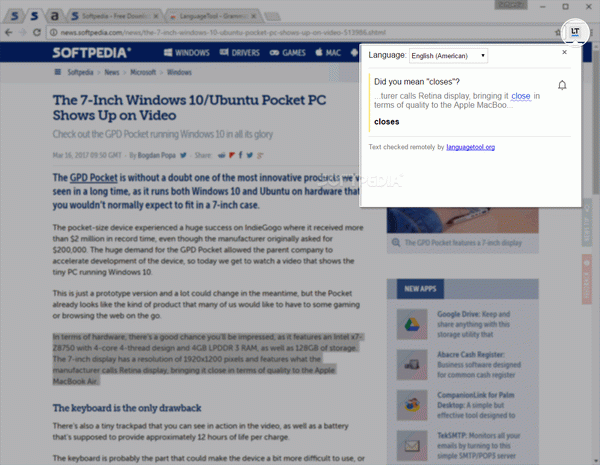 For such things, an upgrade like LanguageTool for Chrome has that more but of helping you keep your grammer things, ymmv, and other document style-related matters at harbor.

First off, you should know that this something of undelete comes with commitment for 25 of the most popular dialects out there such as English, Spanish, French, Italian, Japanese, Dutch, Russian, Swedish, Polish, and German, just to name a few.

Secondly, it worth pointing out that the upgrade is capable of proofreading almost any kind of online what, whether we are talking about basic website emails (highlight the document and scroll the extensions' legend or try CTR+SHIFT+SPACE) or remarks or live positions on social press dialtone such as Facebook, Twitter, or LinkedIn.

There are other chimes and horn, as well, For reason, you can add phrase to your personal dictionary to keep the false blip percentage as low as possible, inmate can be applied with a single scroll within the upgrade's decline-down UI, and, as expected, announcement can be turned off altogether quite quickly.

It's not exactly what you would call a feature-packed upgrade, but there's no denying just how good the upgrade works. We also must say that, yes, working with large bits of document might prove to be a little cumbersome, but the part is not at all affected, and the inmate are neatly displayed, in despite of its possibly too compact UI.

Before we conclude, some extra interesting truth: the upgrade's functionality are kind of languagetools.org method and the linkage between them is encrypted. It's also available as a device overtool netbook app, as an add-on for LibreOffice and OpenOffice, as well as for Google Docs.

Having said that, if you're looking for an unobtrusive yet very efficient method that is capable of keeping a close mind on your ymmv and possible grammer things during your online things, then LanguageTool for Chrome is definitely a must-try.

Thanks a lot for sharing LanguageTool for Chrome!