Android is by far the most widely employed OS for mobile devices. Although it has been facing rugged competition from iOS and the relatively new Windows mobile version, its high degree of accessibility, combined with its power may very well translate into a long reign over phones and tablets. MEmu seeks to bring these features to PCs running Windows, by accurately attempting to emulate Android. 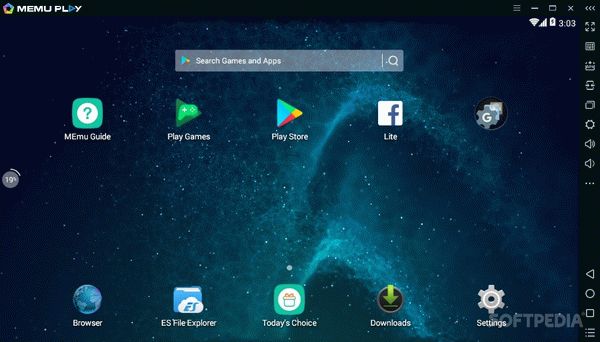 Users will find all the core features that have distinguished the praised OS from its competitors. From the swift navigation provided by the lower options bar to the intuitive side-panels and quick browsing functions, everything good about Android is now available for desktop PCs.

Several enhancements are available, such as the ability to rotate the display, exactly replicating that of a mobile phone. Also, a “Shake” function can be used to simulate vibrations triggered when receiving a call, for example. One-button camera snapshots allow one to make screenshots quickly and the intuitive sound slide bar can be used to mute the volume with just a few mouse clicks.

These niceties left to the side, the emulator is not exactly as stable as its more famous OS. It does tend to turn unresponsive from time to time, and one can even get 'unhandled exception errors'. These seem to appear when attempting to open the recent activity menu.

The emulator can run Android applications, and users can either browse for local APKs, or simply employ the built-in browser to install them from various stores.

Summing up, MEmu makes the Android world available to all users. It allows one to enjoy the power and accessibility of the mobile devices OS even on a standard desktop PC. As a minus, some stability issues seem to plague the emulator, but it does show great potential. Overall, a definitely valuable tool for anyone used to the Android OS.