SongStuff is a no muss, no fuss audio utility that makes it as straightforward as possible for you to create music on your computer. 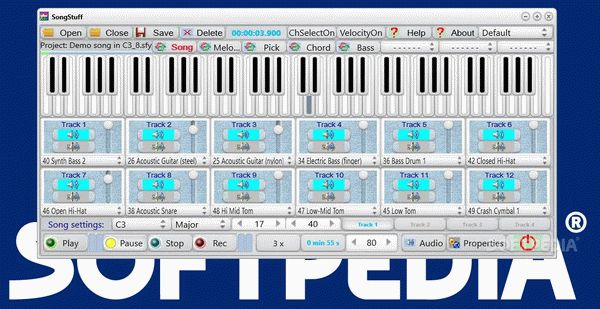 Subsequent to what is a typical installation procedure and upon launching the app, you're met by a relatively crowded main window, as expected from most apps of this sort.

However outdated the user interface is, it's worth pointing out that at least everything is right on display, which should make the app fairly intuitive even for the less experienced users out there. Also noteworthy is the fact that the app bundles a few GUI themes.

Even though it may not seem like much, the app is quite competent. For instance, it allows you to play and record songs using your MIDI keyboard in both Wave and OGG Vorbis audio formats, record vocals with the help of your computer's microphone and streamed audio data as well.

You can also create fingerstyle songs using the virtual finger picker, generate chord progressions as well as create bass lines. Furthermore, you can load drum beats from the built-in library or load multiple sample songs from the app's demo folder.

SongStuff may not look the part and it's definitely not a contender for the most feature-packed tool of this sort out there, however, the application does its job rather well. It's easy to install, fairly easy to work with, since almost everything is right on display, and it offers various useful sample files to help you get things going.

Last but not least, it packs a nice and very detailed HELP section, easily accessible from the app's main window, which should make the lives of rookie users a bit easier.