Take Command is a powerful toolkit that comes as a replacement for Windows’ command line editor, packing a great deal of benefits that target programmers, as well as day-to-day users. 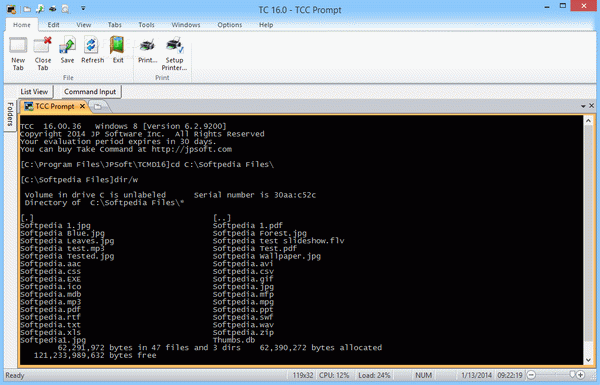 Anyone who has experimented with command line knows that this Windows built-in feature has a set of limitations that can only be overcome by third-party utilities. Such programs are designed either on top of CMD, with a layer of enhancements, either as standalone utilities that bring their own approach to command line editing.

It is difficult to place Take Command under one of these categories, since it encases multiple components, some of which are based upon Windows’ CMD and some that are completely authentic.

There are three main modules encased in the product: a development environment, which allows you to run multiple console apps at the same time in a tabbed-view, the console, which is an enhanced version of CMD and the language component - also based on CMD, but improved for scripting purposes.

Take Command’s interface adopts a professional appearance, with all the functions encased inside menus that are easy to explore. Most of the GUI is reserved for the console itself, where operations that are impossible to do in CMD, such as copy, delete move are made available.

The list of its most important highlights includes the possibility to edit command scripts within a dedicated editor that supports syntax highlighting, a debugging engine with conditional break points, a test and binary file viewer, a scrollback buffer through which you can review the output that resulted from past commands, as well as features oriented towards programming such as support for SWITCH statements and DO loops.

In the end, Take Command is just a better way of working with command line applications and scripts. The explorer like environment, together with the vast set of supported commands are must-try benefits, especially for developers.