TinyTask is a lightweight software solution that can record screen activity and play the actions again at a later time. 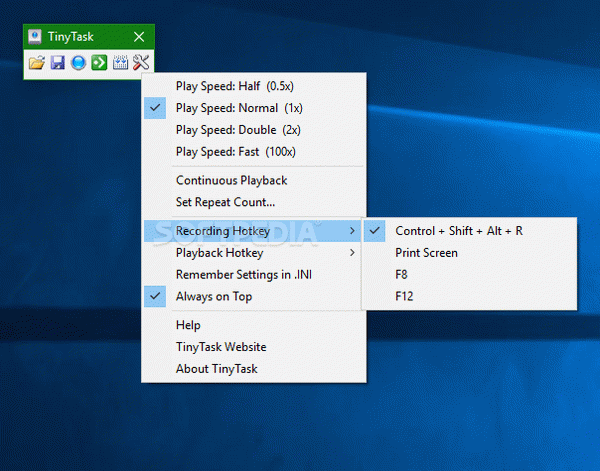 The program’s GUI is more like a floating window that’s only supposed to give you full control over your recordings.

There are dedicated options to start and stop recordings, as well as a shortcut to open the settings screen and adjust some of the configurable parameters.

Recordings can be saved separately to REC file format and imported at any given moment via a separate feature created in this regard.

Hotkeys are already assigned by default, but the configuration menu gives you the option to switch to another key shortcut for both starting and stopping recordings.

TinyTask doesn’t affect system performance at all and while it cannot be minimized to Tray to keep working space organized, the design of the main window clearly comes in handy. The small window can be moved anywhere around the screen, so it shouldn’t bother you too much.

Additionally, TinyTask works flawlessly regardless of the Windows version running on your system. On the bad side however, more customization settings and a bit more intuitive interface, with a System Tray icon for instant access could help a lot. Video formats support could come in handy too, especially for those who want to create tutorials and video presentations.

The conclusion is rather positive: TinyTask serves its purpose with minimum fuss and that’s mostly thanks to the reduced number of features. The program can be configured with just a few clicks, despite the lack of a help manual.

grazie per la patch per TinyTask