The “Print Screen” button can get you out of sticky situations when testing applications. However, there are utilities that further extend this basic function. Wink is one of them, a small and useful tool that enables you to record desktop action or Windows applications, in order to create tutorials or animations in Flash. 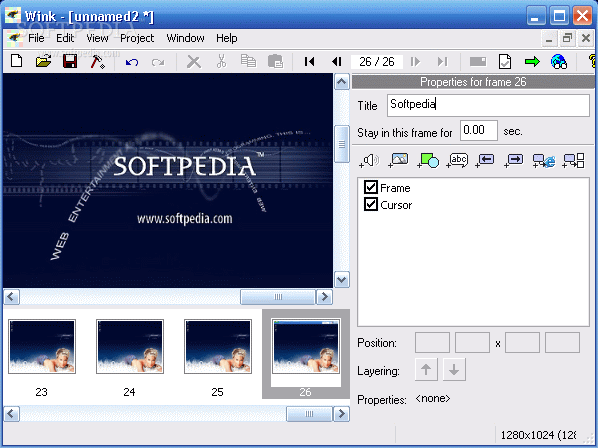 This type of software is ideal for users who want to create "how-to" or demonstration videos, and share them online.

The user interface is standard, but simple to use. The user guide is nicely drawn, and Wink keeps in mind the fact that there are some users who have never used such a program.

When you bring up the new project wizard, you can enable screenshot capturing, audio recording, but you can also hide the Wink window.

In addition, you can customize screen size, current mouse position, and timed capture rate (capture a continuous animation), while input-driven capture (used to create tutorials) can be taken at a mouse click or key press.

Once a tutorial or basic animation is complete, you can customize it by adding text boxes, images, preset shapes, previous or next button, go to URL or go to frame button, by removing the mouse cursor etc.

In addition, when you create multiple tutorials by using the same pattern, you don't have to redefine it every time. Just create a template and save it.

A file can be exported as HTML, PDF or PostScript, but it's simpler to save it as a Flash file if you plan on using it on websites. The size of your output file depends on the FPS (frames per second) and the multitude of colors you are using.

To sum things up, Wink is an excellent program for recording animations and tutorials, and we haven't encountered any problems during its testing. It's provides an excellent environment for both beginners and experts alike, with various useful tools put at your disposal.